An Acoustic Evening with July for Kings 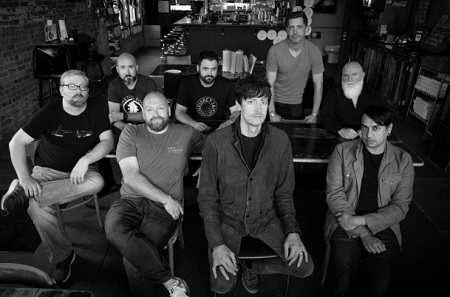 July for Kings, Cincinnati-based rock band spearheaded by Joe Hedges, will be celebrating the
20th anniversary of their major label debut SWIM with an acoustic show at the Woodward
Theater in Cincinnati, Ohio on November 26th. Musicians that have participated in the band’s
studio and live shows at various stages throughout its two decades of music-making will perform
alongside Hedges including founding members TJ Miller, Jason Morgan and Sam Dobrozsi;
bassists Drew Philips, Brian Ives and Aaron Thomas; Hedges’ long-time drummer and
multi-instrumentalist Dan McQuinn; and frequent studio collaborator and guitarist John McGuire.
This is July For Kings' first performance in over six years and the first to feature a
near-comprehensive line-up that celebrates the band’s history. Cincinnati entertainment
personality Mark Borrison will serve as the MC.

BAND BIO
July For Kings are a melodic post-grunge and alternative pop/rock outfit that formed in southwestern
Ohio in the late 90’s. Previously known as Swim, July for Kings were formed in the Middletown, OH

area in 1998 by Joe Hedges and high school friends Sam Dobrozsi, T Miller, Jason Morgan and
Travis Delaney. Within a few short years the band had released several independent albums and
amassed a large following in the Cincinnati, Ohio area frequently packing venues such as The Mad
Frog. This caught the attention of music producers and several record labels including Wind-Up
Records, a label that had established itself through the success of the band Creed.

July For Kings ultimately signed with MCA Records and had several songs that fared well on radio
stations across the country in markets such as Las Vegas, Memphis, Cleveland, Phoenix and
Cincinnati. The band toured frequently performing with bands including Collective Soul, Counting
Crows, Nine Days and Muse. July for Kings were dropped from MCA upon the label’s dissolution in
2003, and drummer Dobrozsi and bassist Morgan subsequently left the band. During this time,
Despite this, the band moved ahead with Hedges at the helm releasing several independent albums including Nostalgia in 2005, which was CD Baby’s #1 selling album during its initial release. The band went through several line-up changes including a stint with Amos Heller on bass, who has since played bass for many years with Taylor Swift. The band’s most recent album, Middletown, was released independently in 2015, and is available for download on Amazon and Spotify.
Copyright © 2023 CincyTicket, All Rights Reserved. - Ticketing System by CincyTicket Solutions