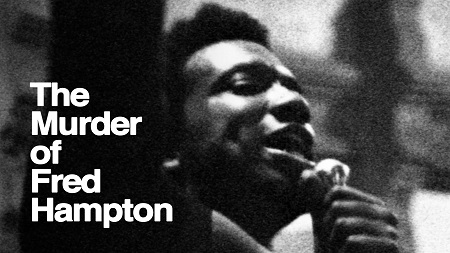 Hosted by Kathy Y. Wilson and presented in observance of Fred Hampton's birthday

Notes courtesy Chicago Film Archives:
The Film Group’s The Murder of Fred Hampton (1971) was photochemically
preserved in 2017 by the UCLA Film and Television Archive, using
elements deposited in their archive soon after Mike Gray’s passing in
2013. In 2019, CFA, in cooperation with UCLA, produced another 35mm
preservation print of this remarkable film, currently housed in our
collection.

Originally going into production with the working title Black Panther,
the filmmakers intended to cover the rise of the Black Panther Party’s
Illinois chapter, with a focus on its charismatic leader, Fred
Hampton. In the middle of production, the trajectory of the film
pivoted quickly when, in the early dawn of December 4, 1969, at the
direction of Cook County State’s Attorney Edward V. Hanrahan, officers
raided Hampton’s apartment on Chicago’s west side, murdering Hampton
and fellow Panther Mark Clark in their sleep. After Hampton was
assassinated, the film suddenly became a two-part document of a
stillborn revolutionary moment. The first half is an affecting
portrait of Hampton; the leader is captured delivering speeches on
social revolt and racism before large, rapturous crowds. The second
part becomes an audacious piece of investigative journalism, making a
compelling case that the police intentionally murdered Hampton, since
they feared his oratorical power more than anything.

The Murder of Fred Hampton was in many ways a continuation of American
Revolution 2 (1969), which focused on the nascent collaboration
between the Panthers and the Young Patriots. Both productions were
helmed by The Film Group’s Mike Gray and Howard Alk, two accomplished
Chicago filmmakers. Gray conceived of and penned the prescient
screenplay China Syndrome, and Alk was a central figure in Chicago’s
art scene, as one of the founding members of Second City. Alk was a
faithful documenter of the era’s most important figures: from the
political such as Fred Hampton and the Black Panthers, to the cultural
icons Bob Dylan and Janis Joplin. Alk’s later association with The
Film Group gave direction to that company’s most renowned works. After
a long battle with drug addiction, died in 1982 at the age of 52,
cutting his career short.

The Murder of Fred Hampton, which includes glimpses of other important
Panther members, such as Bobby Rush and Bobby Seale, is a deeply
expressive and revealing portrait of the decade’s fiery political
discourse. The film is “activist” oriented cinema at its best,
presented with breathtaking immediacy.
Copyright © 2022 CincyTicket, All Rights Reserved. - Ticketing System by CincyTicket Solutions