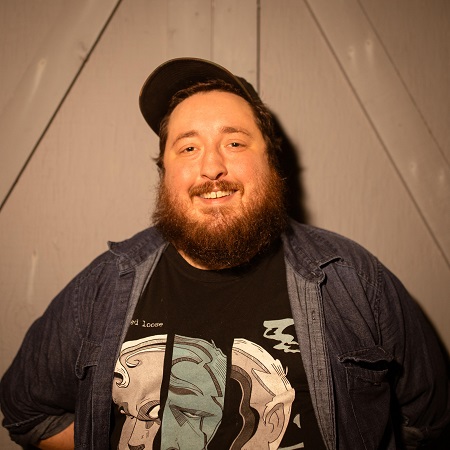 REQUIRED TO ENTER: PROOF OF COVID-19 VACCINATION OR NEGATIVE COVID-19 TEST PERFORMED WITHIN 72 HOURS PRIOR TO EVENT.

On Thursday, October 28th, MOTRmouth is happy to interrupt its normal show for a special live taping of the hilarious Blake Hammond's stand-up comedy special that will premiere on Amazon Prime later in the year. Blake is one of the best comedians in Cincinnati, so you don't want to miss him putting his half-hour on tape. You have two opportunities to catch him in the basement of MOTR Pub at 7:00 PM and 9:00 PM. Opening will be some of Blake's friends and fellow Cincinnati comedians. Get tickets to reserve your seats, and bring proof of vaccination or a negative test.

Blake Hammond is a comedian from Cincinnati, Ohio. He is equal parts funny and honest. He weaves well-written material into his growing storytelling ability to create a show almost everyone can enjoy. Blake’s comedy has been put on Audible.com and he was a featured performer at the 2018 Limestone Comedy Festival. In 2019, Blake opened for Patton Oswalt, Mark Normand, and Doug Stanhope. Blake would also like you to know that he’s a little bitch, but he’s funny though so come see him

MOTR WILL REQUIRE ALL PATRONS AND PERFORMERS TO PROVIDE:

HARD COPIES, PHOTO COPIES OR DIGITAL PHOTOS OF THE ABOVE ARE ACCEPTABLE.
Copyright © 2021 CincyTicket, All Rights Reserved. - Ticketing System by CincyTicket Solutions