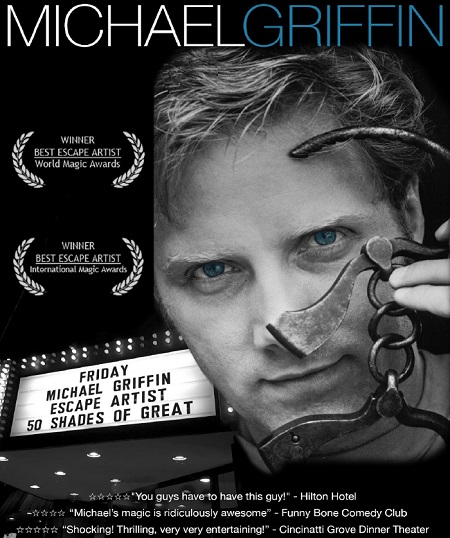 Reserved Seating: $25 advance
Masks are not required, but are optional. The theater is open at full capacity.

Free Parking
More info: www.sorgoperahouse.org
This show is your chance to walk away the winner of $100,000!

Michael Griffin, combining intensely original magic and impossible escapes, possesses the uncanny ability to free himself from any extreme escape challenge known to man, from water-sealed oil drums, coffins, to mental hospital cells and official police restraints from around the world.

One of Michael Griffin’s main focuses in the field of escape has become the “Challenge Escape” and he has become the recognized master in this dangerous game. Michael has a Worldwide challenge offering $100,000.00 to the group or individual that can restrain him in a rational way so that escape would be impossible. Many have stepped forward to accept the challenge but so far the money has remained in Michael’s possession. Are you creative? Challenge Michael to an escape, who knows- if he uses your idea you could earn some cash! Please visit http://www.escapeguy.com for the details, and remember the object is not to kill him-he’s a nice guy.

He has twice been named by the World Magic Awards as "The World's greatest living escape performer". In 2002 Michael was the only escape artist granted permission to reenact Houdini's 1912 death-defying escape, being bound handcuffed and sealed inside Houdini's 90 year-old original packing crate and lowered into Florida's intercostal waters. He escaped in 45 seconds. Don't miss his thrilling performance at the Sorg Theater!