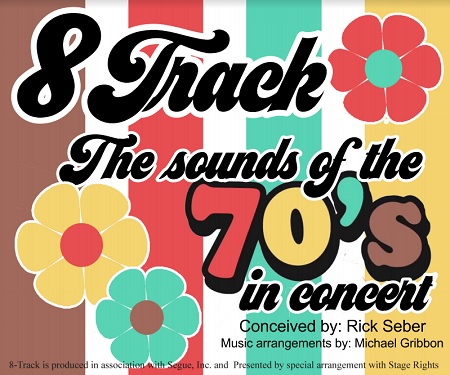 Reserved Seating: $25 advance
Masks are not required, but are optional. The theater is open at full capacity.

Put on your leisure suits, halter tops, and platform shoes and get ready to boogie down through ten years of groundbreaking music! With its propulsive rhythms and dazzling harmonies, 8-Track is a fast-paced musical romp through one of the most impassioned decades of the 20th century. This Baby Boomers’ dream come true features the music of The Emotions, The Carpenters, Labelle, Barry Manilow, Marvin Gaye, The Doobie Brothers, The Bee Gees, Helen Reddy, KC and the Sunshine Band, and more! Rediscover the heart and soul of the forgotten decade with this joyously rousing, moving, and often downright hilarious musical in concert. Conceived by Rick Seber with music arrangements by Michael Gribbon.

8-Track is produced in association with Segue, Inc. and Presented by special arrangement with Stage Rights.